2013 started for me with the Pittwater to Coffs yacht race. I had managed to secure a spot on Kaliber, a Beneteau First 47.7, and would act as relief helm on one of the crew rotations as well as helping out at the back of the boat generally. The race left me dreaming of upgrading Ten8ious (my own boat) to a TP52… one day… it also lit a few sparks in my mind as well. It showed me the mental tenacity required to race over long periods of time and reminded me of one of my dreams to travel around the country to race. I flew out of Coffs on a perfect, clear sunny day inspired by the amazing coastline. My next focus was to plan for the second half of the Sydney sailing season that would culminate in the FT10 Nationals where Ten8ious would ultimately finish 5th. 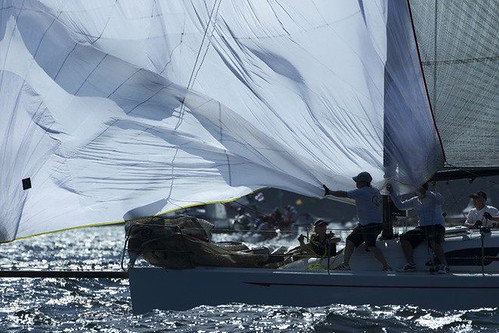 The thing is running a boat and crew can be tough work, absolutely worth it when the racing is great, but a massive waste of time and money when it isn’t. My observation is that yacht clubs can very easily get more focused their bar’s and marina’s than racing. When this happens the latter is usually the outcome. So I stopped drinking at the bar… and in general replacing beer and red wine with protein shakes instead. By June I had dropped 10kg without even the slightest bit of exercise.

At this point I figured I would take advantage of the lost weight and would try running – 1.5km down Allambie hill being dragged by the dog, have a rest and the slowly run/walk back. Eventually I could outpace the dog and thanks to my Nike+ GPS I was sufficiently incentivised to keep pushing. 3k became 5k and I signed up for the Sydney Harbour 10k. It really didn’t matter that I had never run 10k, it was all about the challenge. Off I went to make sure I could do the distance and my first attempt at 10k took the best part of 1hr. Pretty quickly I was able to chip away at that time until I was approaching the 50min mark.

Suddenly I found myself wondering what a good time was… consensus around the internet was 45min is a good general target with 43min for a reasonably fit person around my age. So I set the lofty goal of 45 min. Why not… I had never run before in my life and only a couple of weeks earlier a 5k run meant sore everything for at least a couple of days. Race day arrived, a glorious sunny Sydney day, and I put in a 46:29. Good enough to be very pleased but just not good enough to ensure I was inspired to keep training.

Living on Manly Dam I also discovered the pleasure of trail running and scouring the web discovered the UTMB races in Chamonix… the 100km CCC became a goal.

I signed up for the 25k Woodford to Glenbrook Run AND the 100k Glasshouse Mountains run. In for a penny in for a pound as is typical for me. In what must have been Sydney’s driest winter the drought was broken for one week only… right before the W2G and with such torrential downpours that the causeway was flooded and the race postponed. The new date was the exact same as I was to race the Glasshouse 100 that I needed to run to score a qualifying point to be eligible for the CCC. I am not stupid and realized that charging off and attempting to run 100k without anything behind me would not be particularly smart. So I withdrew from the Glasshouse race to focus on the immediate goal of the W2G.

The other thing that happened in June was I decided to build some new bikes. Over the course of a couple of weekends I sold my old ones and started the quest for something new. I decided to give Chinese carbon a go. And so with a newly formed running habit and a new bike I figure I should add a proper ride to my regime. So now I was running and riding and with my withdrawal from the Glasshouse 100 definitely not going to Chamonix in 2014. Time for another lofty target.

The next major endurance event I could find was Ironman 70.3 in Port Macquarie, so I entered and set about making sure I would be able to ride 90km and run 21km with the odd swim thrown in for good measure. I didn’t have particularly rigid program but rather tried (generally unsuccessfully) to simply put in 2x the respective disciplines race distance each week. And I tried to mix it up a bit with short and long training both on and off road. 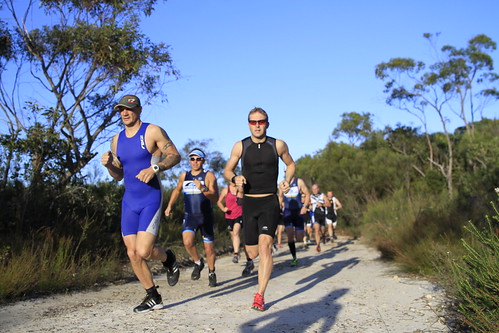 It also gave me a great excuse to build another new bike. And get a Garmin (as good as the Nike+ is… it’s a focused device). And get some Garmin Vector pedals.

The rescheduled W2G 25k trail run finally came due. The last the last half being all downhill is great but the first half is tough. Again I’d set a high bar as a target – 2hr. I managed 2hr 6min for a 5:01 pace.

As a lead up to Port 70.3 I also really wanted to run in a half marathon and the Sydney Running Festival fitted in perfectly. Once again I set a big goal… 90 mins… and off I went. Only thing is a 90min half marathon equates to 4:15/km pace and realistically I was training at 4:30 pace (my training times at 10k had quickly outpaced my Sydney Harbour 10k time). I would give it a shot anyway and stuck with the 90min pacer for a while before losing him after 7 or 8km. As I was passing half way, he popped up again 50m ahead and I lifted for a few km but faded again. I finished in in exactly 1h39m net for an average pace of 4:36/km. Another result to be pleased with. 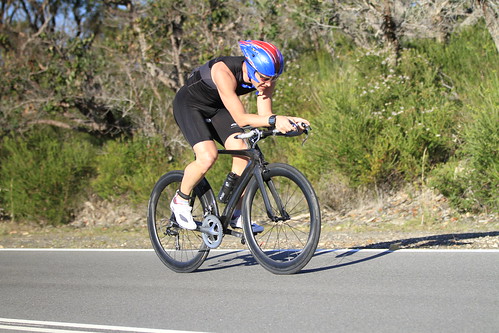 I also tried to get some triathlon experience. Winter is the offseason in triathlon world so it was looking pretty tough. Fortunately Warringah Triathlon Club has the perfect solution with its West Head Duathlon series. When I joined Triathlon Australia I signed up with Balmoral Triathlon Club for no other reason than I knew they existed. It would be great if first year Triathlon Australia members didn’t need to pick a particular club but rather their TA membership gave them discounted “any club” membership and 12 months to nominate the one they wanted to join. Now I had to figure out how to join a second club. Turned out it wasn’t too difficult using the online system and I am really pleased with my decision. The West Head course is a dream (even if the run is tough) and helped me understand transitions, how to run after riding and what sort of pace I can, and need to do. My first event I managed 1:22:04, my second 1:20:17… A small improvement.

After all that I was as ready for Port as I could hope to be. In 12 weeks I had gone from virtually never running and a minimum of riding to being on the cusp of racing an Ironman 70.3.