I always feel that summarizing a big event like an Ironman misses a lot but as a preview…
Busselton and IMWA are great. I enjoyed myself immensely. I ended up with a time of 10:27, a 22min PB and 48th in my age group. It wasn’t quite as fast as I was hoping for but still an awesome outcome.

Training and Lead Up

Reading my weekly recap blogs you can see my training has been a little disjointed and inconsistent. It was generally focused on enjoyment, racing and commuting rather than really dedicated to specific training for the Ironman. I never cracked an 8hr week. In short I was underdone but there were plenty of really good indicators that, while in terms of max potential I wasn’t in as good as spot as Port, my base was still higher.

This block really was a run of races that started with the Southern Highlands Challenge, rolled through the 70.3 on the Sunshine Coast, and then Kedumba Half, Challenge Forster before a final push to IMWA. These events where all about building confidence and form in a focused environment with good intensity and without getting bored.

I had 2 plans for the race. Plan A was to go sub 10hrs by having a smart bike leg and grabbing time on the run. Plan B was to survive the swim, lay it all on the line on the bike and soak up the atmosphere enjoying myself on the run and at least beat my time overall and in the run at Port. Coming out of the swim I would decide which plan I was on. If I am the wrong side of 1hr 15mins it will be Plan B. Sub 1hr 10mins and Plan A is a go. 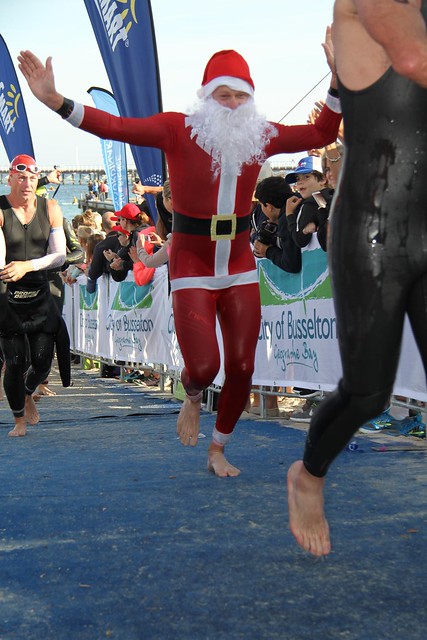 I really enjoyed the swim at Busselton. The novelty of swimming around the jetty is cool but it doesn’t really factor into things as the course is a little bit wide of it. Its nice to swim in crystal clear water and have some visual stimulation and reference of speed and direction. The race itself is a mass start. This was my first and it was OK. There was a bit of a wrestle at the start but Busselton has so much space it clears out pretty quickly. The mass start at Busselton is every bit as good as the rolling start at Port. The only tough thing was finding the right person to follow. I think I failed on that count and after following someone with a seriously scary kick for a while just cleared out into open water for a while till the top mark. There was again plenty of traffic around the marks at the top of the course. I could have stopped swimming and still moved at the same pace the draft/current from the preceding swimmers was that great.

The swim to shore was uneventful and pretty soon I was exiting the swim in 1:09 pretty relaxed and ready to execute Plan A. I guess I should push myself harder rather than cruising through at training pace but I usually wipe out any losses in the first few k’s on the bike in any case.

Oh and I was beaten by Santa 🙁 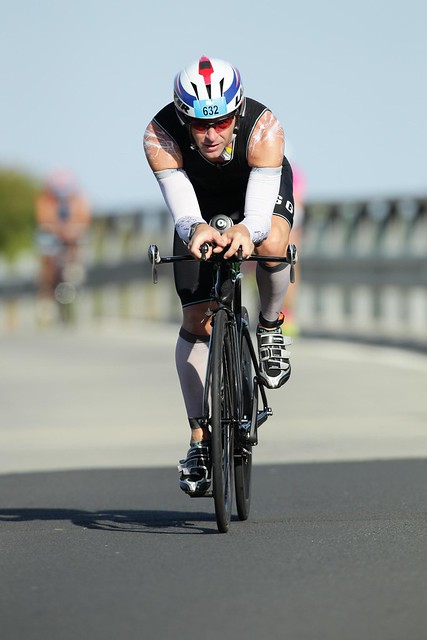 Transition went pretty smoothly. I decided to run to my bike with shoes in hand and put them on before exiting transition. I was using my normal road shoes for this race (as I did at Port) so leaving them on the pedals wasn’t really an option. I started of the ride at a pretty easy pace focusing on taking on some food and liquid but pretty quickly settled into a good rhythm. I was making up places fairly constantly although did have a couple of instances where guys decided to try and pass me immediately. Both times I almost had to grab the brakes to drop back out of the draft zone and re-pass them straight away never to be seen for the rest of the day. I am not sure what they think that they are achieving 20k into a 180k ride maxing themselves out so bad… but that’s their problem not mine. By the end of the first 90k lap I was up 424 places to 206th and was feeling good.

One thing about the ride at IMWA is it is flat. So flat that if you want to take a break from pedalling you stop. At about the 110km mark I realised my feet were starting to get into a world of pain. The outer edge and pinky toe were numb and the next toe in hurt so bad I couldn’t transmit any power. I tried shaking out the pain, loosening my shoes and taking longer breaks from pedalling but my feet were having none of it.

I also had to stop for a moment when my rear disc wheel covers looked like they were coming loose. They weren’t but having had them catch the frame on Saturday morning I was probably being overly cautious.

I pressed on as best I could and hoped that the result would be fresher legs for the run provided I could get my feet working again in transition.

I ended up with a 4:59 split on the bike and 110th best time overall. The foot issues on the second lap probably cost me about 10mins. I averaged 38kph on the first lap and only 34.2kph on the second for an overall average of 36kph 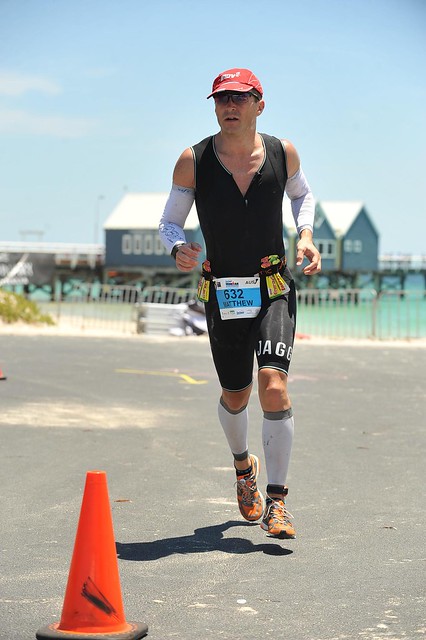 Into transition and after a moment sitting down and rubbing my feet they started to come good. I quickly got my shoes on and headed off. I was pretty certain at this point my result would be about 10:10. I felt good and had a good few kms to start. It did however start to get quite hot.

At this point my brain decided it wasn’t going to risk bonking and went into run/walk mode. Ended up spending a km or so at this point chatting to another Matt from WTC before I decided to just stick to my own pace. This was OK so long as I could hold a 5:30/km pace, which I did for a while, but before long this started to blow out.

The family were cheering for me at the first turn around which was also really nice and gave me an extra lift early on each lap.

One difference to Port was I didn’t feel strong in the last 5km. Maybe it was the lack of Red Bull at the aid stations! I got myself home pretty comfortably in the end in 10:27:39 and 48th in my age group. A 22min PB. I liked finishing in the late afternoon rather than evening twilight too!

While I didn’t get under 10hrs I did achieve a big PB and if I use the Ironman AWA ranking system as a guide a much better overall result in terms of points compared to Ironman Australia. I also PB’d all the legs (and transitions) except the swim which was only 9s slower but was certainly a true 3.8km (IMOZ was likely a little short).

It’s very hard to be disappointed, and in fact I am not at all. I am still hungry to keep on improving and can see the opportunities pretty clearly. The challenge really is pulling together and executing a training plan that lets me step up to that next level while still enjoying myself and racing the events I want to when I want to.

A lot of Ironman racing is mental and two key areas I can definitely work on is tackling the swim like I am actually racing and digging deep on the run till it really hurts. My run specifically has been a consistent mental weakness in this block. Hopefully the long distance trail runs I have coming up help me get the confidence I need to dig deeper. It is all to easy to go into cruise mode too early.

I finish 2014 with an AWA ranking of 39th in Australia in my age group and 252nd globally which is pretty cool. This gets me to silver level which to be honest is pretty worthless but nice to know!

Its certainly not locked in but there is a pretty good bet Ill be back at Busselton in 2015… again shooting for sub 10. As a race, as a place to host an IM and just generally Busselton is awesome. Kind of like Port it does this thing really well. Its everything Forster isn’t. I think the saying you are only as good as your last race and in the case of Busselton its got to be a contender to be a world champion!

One thought on “Ironman WA”