From when I registered to race day was almost exactly 3 months. 3 months to figure out how to go the distance in each leg. 3 months to get good at 3 things. Somewhere along the way I also imagined I could do it all in 5 hrs… 35min swim, 2:35 ride and 1:50 run. That just made me train harder, at least in the bike and run. I swam a bit but knew I was underdone.

Training done, copious amounts of gear checked, packed, rechecked and repacked, we fled Sydney on an extremely hot day. We passed plenty of firetrucks on the way to various bushfires. We didn’t see fires any near us but letter that day the highway was cut in several places. It was good we got through early. We spent our first night at Bonny Hills, just south of the bike turn around and the location of my first solo paraglider flight but I wasn’t there to fly this time. Plan was to ride up North Brother on Friday and then on to our accommodation in Port Macquarie along the bike course. 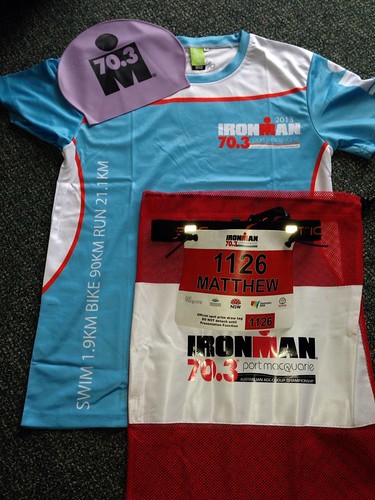 Friday morning came and the weather had other ideas. After the extreme heat of Thursday, Friday bought torrential, tropical rain as heavy as I can remember. I wasn’t riding anywhere!

We drove on to Port, found our hotel right next to the start area and transition and went shopping waiting for the weather to clear. Fortunately it cleared right on checkin time so I jumped in line and excitedly picked up my pack including t-shirt and timing chip. What time do I start? No idea… they will tell you tomorrow at the race brief.

They didn’t, instead they instead told us we would he marshalled in the start area. Although they did tell us we didn’t need to wear our race number on the bike leg as we already had numbers on out helmet and bike. That was appreciated.

Race day came and I was there ready to be marshalled. Only thing was we weren’t and what was worse there were multiple start groups with the same colour caps. Finally I found the single person who had the run sheet and could tell me what was going on. My start was second to last, some 40mins after the pros. Had I known I would have kept clear of the start and watched the pros swim. 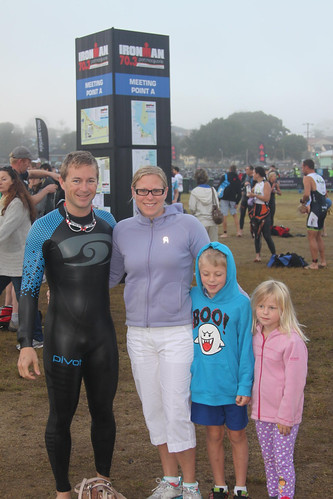 Is it seriously that hard to figure out a start program a week ahead and publish it and on what planet is it a good idea to start the biggest and one of the fastest age groups last. Turns out Elite Energy can get this info out at the start of race week for their events, why can’t Ironman?

My start time came and off we went. I was feeling good and had a strong initial run my GPS log had me rounding the 1km mark at 15min and then I have no idea what happened. I felt I was still swimming well and sure I got caught up in a few slow people from earlier waves but as I exited the water I wasn’t expecting to see 43mins. Disappointing but I still felt strong and fast. Off I went not quite prepared for how rough the road was.

In the first couple of km I had lost my drink bottle out the back and my handlebar mounted bottle had shaken itself out of position. At the time it seemed like it had leaked itself empty too. Nevermind the first drink station wasn’t too far away. I needed that drink when it came but still couldn’t get anything out of my now refilled drink bottle. For 70km I had to survive from drink station to drink station which was not ideal. The lack of hydration also meant my gels weren’t getting consumed and when I did they were just horrible on my stomach. And then as I turned at Lake Cathie for the last time I discovered the straws in the drink bottle had vibrated up out of position. I pushed them down and had a huge drink, refilled and pushed on. 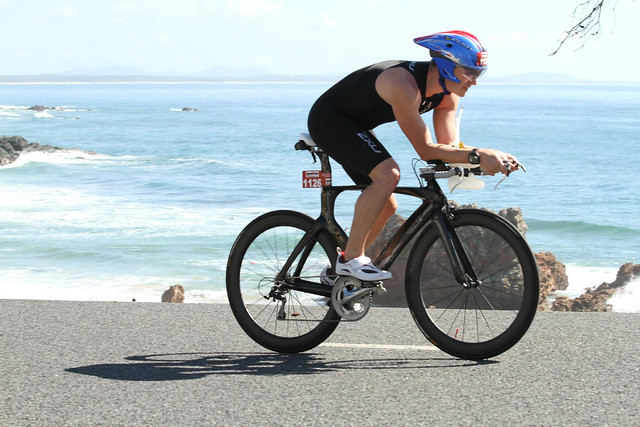 It’s worth noting that you only get a partial understanding of what the course is like from the car. You don’t get to feel what the road is really like and you definitely don’t get to feel how steep the hills are. In this case Macquarie Lighthouse hill is super steep. No worse than Seaforth Summit which I climb at the end of any day I bike commute but still steeper than you think.

With the last hill behind me I quickly descended into town and decided to try and get one last gel in. That was a mistake or more likely the combination of gel and washing it down with the steamy how water in the bottle I had left in transition.

The bike course is really quite spectacular overall. I was also very pleased with my time. 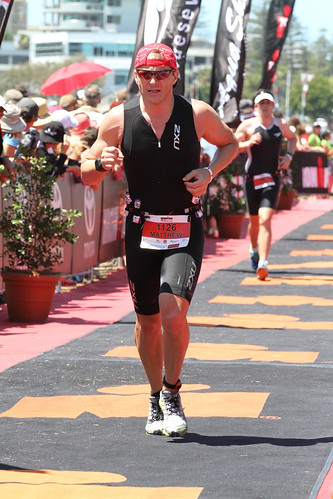 I exited transition and tried to get my legs going. They wouldn’t and refused to give any pace faster than 5:30/km. Then my stomach went bad. I’ve heard it said “never trust a fart in a triathlon” and I desperately tried to make that my mantra… For about a minute and then I decided trust I shall and trust I did. My trust was repaid thankfully. So for the next 5km I impersonated a coal seam (and not and oil geyser) and released plenty of gas and felt much better. I even managed to very briefly lift my pace but by now it was hot windy and I had been going longer than I had thought I would. 5km runs however are my bread and butter now so with 5km to go I pushed on.

Nothing beats the last 1km and especially the finish. 5:38 at my first try. 87th in my age group out of 182 finishers. Slower than I hoped but like all my other races fast enough to be encouraged. I know I can save 30mins easily and 5hrs is an achievable goal. The bug had bitten.

I really enjoyed Port 70.3. Everything about the event was awesome except for 2 things… The start time fiasco and the roads. Both should be easy fixes. I loved how the town got behind the event and the volunteers were amazing. I’ll be back in Port in May to go the full distance.

Sitting down a week after one of the biggest challenges I had undertaken in my life, it’s amazing how quickly it all flashed by. My road to doing an Ironman has been very short, starting …

I had heard lots of good things about triathlons in Huskisson. So with my new triathlon bug I registered for the upcoming Olympic distance event straight after Port. Having spent a fair few weekends there …