The Woodford to Glenbrook race is a trail run (or MTB) down the Oaks firetrail. The race was pretty much the first I signed up for when I started running in 2013 and was also familiar to me as I had mountain biked it a couple of times many years earlier. 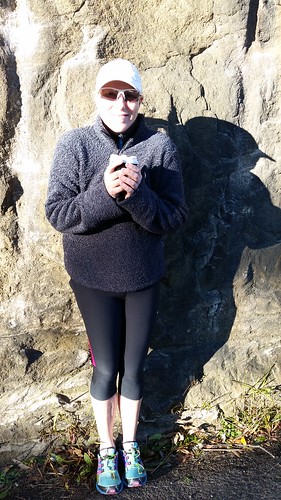 The 2014 race however was going to be really special. This years race was to be the first event (excluding Parkrun and the WTC duathlons at West Head) that I have had the chance to take on for a second time so I could get a direct measure of my progress. But even more special was the fact that I got to do the event with my wife. The event marked her first big run and was a huge milestone.

We woke to a cold and very windy Sydney morning. The kind of Sunday morning best spent in bed. At least it wasn’t raining! We bundled the kids up and left home at 6:50am dropping the kids at the grandparents house and continuing on up to Glenbrook. With zero traffic we made great time to Glenbrook and left the car at the station to get the train up to the race start at Woodford. We had made such good time on the road we actually got the earlier train than we had planned.

I think on the train ride up, the actual run distance started to sink in for my wife. The train ride takes about 30mins as it climbs steadily up into the Blue Mountains proper. Exiting the train there were a few people huddled around the station. Very quickly we realised why. It was extremely windy and freezing cold. Glenbrook was a tropical paradise by comparison and we were very quickly wishing we had hung around down there for the later train. Instead we had a 90min wait in the freezing cold. Coffee helped a little bit and if you could find a sunny spot that was protected from the wind you could warm up a bit.

It was infact so windy that the MTB start a 9am was delayed while fallen debris was cleared from the trail. After watching the bike waves get going reality sunk in and we knew the time was near that we would need to strip down to our running gear and check our bags to get transported to the finish.

For me this meant I had to decide exactly what I was going to wear. I had been hedging my bets and in the end decided to start with a t-shirt and Inov-8 jersey over the top. My other option was t-shirt with arm warmers and in hindsight that may have been better but I was cold enough at the start as it was.

We self seeded at the start ready for an on-time start after the organisers had made up time after the delayed MTB start. I said goodbye to my wife and moved towards the front of the start line while she waited further back. 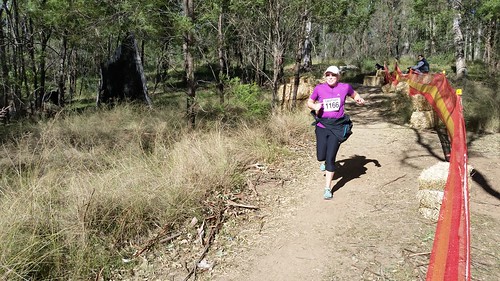 The start was pretty quick and I put in a few sub 4min kms before the hills really started. Between km 4 and 12.5 the course is reasonably tough with a regular series of descents and climbs. The climbs being steep enough and sustained enough in a couple of instances that a fast walk provides a faster net outcome than running.

Once you hit the halfway mark the race is all downhill for the next 12.5 km to the finish. All up you lose about 100m in elevation in the first half of the race and about 450m in the second half. I had learnt from my previous attempt that its worth having plenty left in the tank for the second half as you can string together a good run of fast km’s.

For me the race is really early in my current training cycle. After IMOz my training has been quite light and I had only put in a couple of 10k runs since spending most of my time at the 5km distance so my legs weren’t fully conditioned. I really started to feel the lack of km’s in my feet at about the 16km mark, compounded by my decision to go with my Inov-8 F-Light 195’s. They are great fast shoes and reward you when you have enough kms in your legs but after a few lazy heel strikes on some sharp rocks definitely began to hurt and I dropped a few places as I clung desperately to a 4:30/km pace. 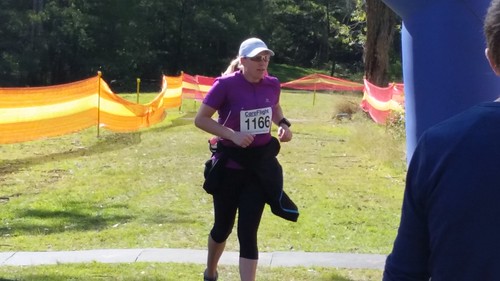 At this point I knew I was going to PB so it was worth pushing on and before I knew it I could hear the race announcers at the finish and emerged from the trees into Euroka clearing for a 1hr 55m 12s finish. An 11 minute PB. Very happy with myself I rushed back to the top of Euroka clearing to cheer on the finishing competitors and wait for my wife. Her prediction was to finish 1 hour after me. About 55mins after I finished she came into sight and after some big cheers, photos and I high 5 I raced back to the finish congratulate her. A huge result for a first distance run, inside her predicted time.

After a brief period for recovery, a sausage sandwich and a bit of a wait for the bus back to Glenbrook station we were headed home feeling very happy (and in a bit of pain!).

The Woodford to Glenbrook run remains a favorite, raising funds for Careflight event for me and again showcases the amazing efforts of the local volunteers that run the event.

One thought on “W2G Race”

“How good was that!” was locked in my mind as I headed home after the Sydney Trail Series 20k at Kurnell. Where trail running is becoming increasingly focused on big climbs and descents, the Kurnell …

Last year at Ultratrail Australia 100 I had one of those rare perfect days. I learnt a lot and resolved to come back stronger and faster in 2016, using the experience to nudge the bar forward …